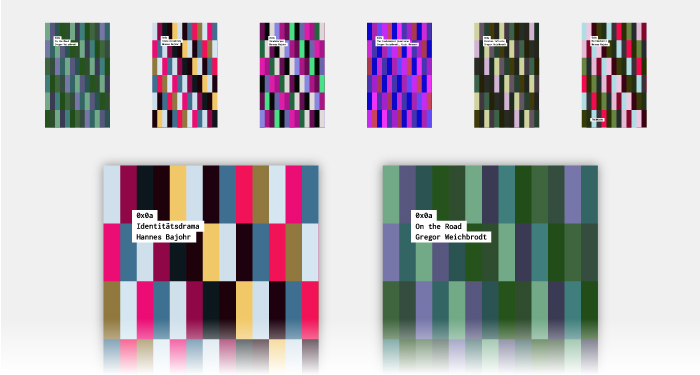 We have decided on a consistent cover design for all works that come out under the 0x0a label. The cover art is generative, and based on about 130 lines of Processing code. Generative in this context means: The looks of the cover are completely determined by certain variables taken from the text itself. Here is an excerpt from the code: The variables in this case are the author’s name and the title of the text. Put in as a string, they determine the colors of the cover. The process is awfully simple: First, we get the MD5 hash for the string “Hannes Bajohr Reunification Corpus.” MD5 hashes are used in encryption, or as check sums for file transfers. Because are sufficiently unique, they can be used to check whether a file was corrupted during transfer. But because MD 5 hashes are returned as hex codes, they can, secondly, simply by splitting them up, be made into colors. As you can see in the second function above, the hash is simply chopped up into six hex color codes that make up the design of the cover. Thus, every text that is published on 0x0a.li gets its own cover, “written” by the its title itself.

Why have covers at all, resembling the shape of physical books? For the moment, mostly because they can be printed on demand later; but also, because even digital things need a “front” or and “outside,” even if only metaphorically, representationally.